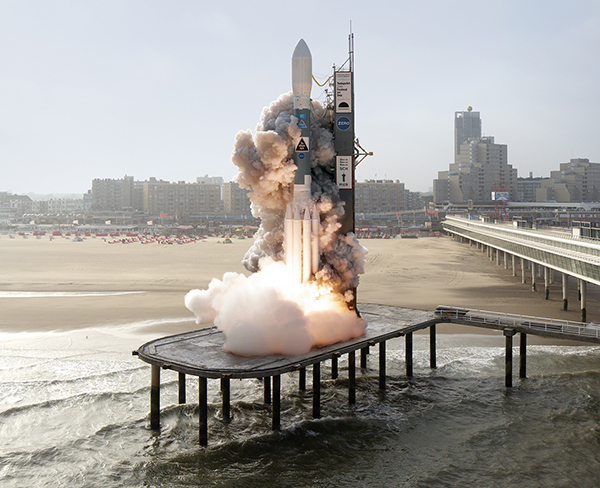 I am very glad to announce my interview with Régine Debatty, from we-make-money-not-art.com, published on September 8, 2015.

Régine Debatty is a blogger, curator and critic. Régine writes about the intersection between art, science and social issues on her blog we-make-money-not-art.com. She also contributes to several European design and art magazines and lectures internationally about the way artists, hackers and designers use science as a medium for critical discussion.

For the 11th edition of TodaysArt Mike Rijnierse has developed a site specific work for The Pier in Scheveningen. During the festival, a 100 kg church bell was thrown from the bungee jump, situated on the tower at the pier, where the festival took place. The sixty meters deep fall of the bell resulted in a unique sound experience.

While contacting Royal Eijsbouts Bell Foundry – world’s largest manufacturer of cast bronze bells, carillons, swinging bells, clocks, and bell- and clock towers – for asking whether they wanted to contribute to the project, Joep van Brussel asked if he had understood it correctly: “So, it is like cycling towards a church with the speed of 60 km per hour?”. The answer lies in the question. Joep immediately understood what is the concept of Klok.

The effect is commonly heard when a sounding object approaches, passes, and recedes from an observer. Compared to the emitted frequency, the received frequency is higher during the approach, identical at the instant of passing by, and lower during the recession. So the fall of the sounding bell caused a Doppler effect, which resulted in a surrealistic metamorphose of the unique location.

Interview: WE MAKE MONEY NOT ART

The ZERO artists of the 60s had an unconditional desire for what was yet to come. They wanted to aim high with their minimalist art work. They no longer felt anchored to the earth; on the final page of one of the magazines published by ZERO there is a photograph of a rocket that lifts off into the sky. On the ten pages leading up to that photo, there is a countdown to the lift-off. Now, on the opening night of TodaysArt 2015, we will pay homage to ZERO’s fascination with space with a symbolic rocket launch on the East platform of The Pier. TodaysArt, Mike Rijnierse, Floris van Bergeijk, Thomas Koopmans and Arjan van Drunen joined forces to create this spectacular son et lumière, which will not pass by unnoticed in Scheveningen.