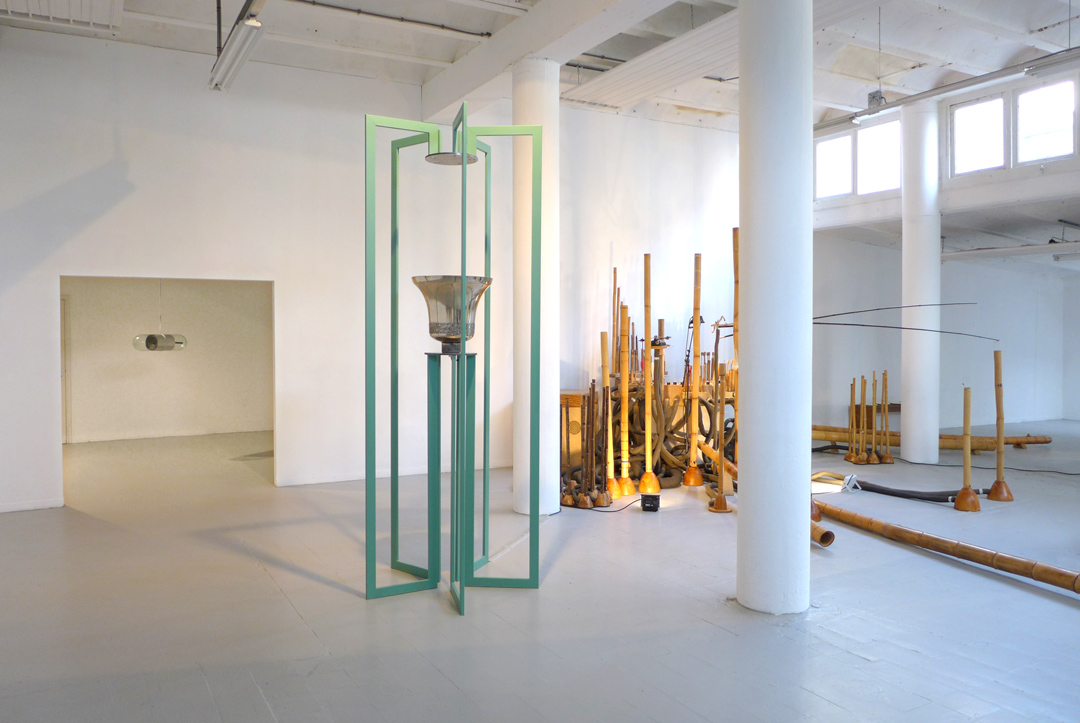 Sino is a single-bell belltower where a bronze bell is engaged via an electronic transducer / resonator. Sino is a collaboration with Rob Bothof.

In western culture, the bell initially had a crucial function as a call for alarm or a signal indicating the closing of city gates. In Sino the bell is placed upside down resembling a singing bowl. Often used in Eastern rituals, singing bowls are also known as ‘standing bells’ or ‘resting bells’. In Sino the bell does not signal a call for alarm or action, but as a ‘resting bell’ it becomes an instrument for inner reflection, a call for contemplation.

Using a resonator instead of a clapper to engage the bell is a very different technique. A strike of the clapper brings out the entire spectrum of harmonics as a result of the bell’s shape (the tuning), giving us a rich bell sound with a typical short attack / long delay envelope. With the resonator, although the frequency palette is still limited by the tuning and the harmonics present in the bell, we can pinpoint and bring out a single resonant frequency and engage it for as long as we like. This way we can deconstruct the harmonic qualities of the bell into single frequencies and from that build a new soundscape with multiple layers of different timbres.

Sino was first presented as part of the exhibition: A State of Amplitude. As this exhibition featured multiple sound works, the soundtrack was shaped as a slow build-up to an apex followed by a period of silence, to give room and connect with the other works in the exhibition.

Since 2020 there has been a lot of activity related to clocks. For example, a curfew has been introduced in the Netherlands for the first time since World War II. Following the introduction of the curfew, Mike Rijnierse has put together a radio broadcast for Radio Tonka which was broadcasted the day before curfew went into effect. As a result, he has conducted extensive research into the history of the bell and the carillon. For example, he discovered that at the start of the COVID-19 crisis, the Council of Churches in the Netherlands created the Bells of Consolation and Hope initiative. They called on all churches in the Netherlands to ring their bells on Wednesdays from 19:00-19:15, which took place from March 18 to May 5, 2020.

The curfew was a symbolic moment of time, when a population was conditioned / alarmed to stay indoors. The English word ‘curfew’ derives from the French ‘couvre-feu’, a time when the city gates closed and the population that moved inside the city gates had to extinguish fire indoors to prevent city fires. When a resident wanted to go outside after the curfew had started, the resident had to make himself known by carrying a lantern, with which the citizen made himself visible. Should a citizen move within the city gate without a lantern, it was considered suspicious and the militia was appointed to stop these suspicious figures. This militia was responsible for The Night Watch (De Nachtwacht).

After World War II the Dutch government wanted to offer a gift to the Americans as a thank you for their help with the liberation and the Marshall Aid. Several ideas have been put forward to express gratitude to the United States, including the loan of Rembrandt van Rijn’s The Night Watch, which would then be temporarily displayed by the National Museum of Art. That ultimately did not go through. It had to be something big and special, our gift of gratitude to the Americans after World War II. While Queen Juliana is preparing for her state visit to America, a committee in the Netherlands is considering a suitable gift for the liberators and generous donors of the Marshall Aid. It will be a carillon consisting of 49 bells. The instrument in which the smallest bell is just as important as the large bells is symbolic of the position in which the Netherlands would like to see itself in the early 1950s. Together with the other countries we will sound in harmony. This is how The Dutch Carillon, placed next to Arlington National Cemetery, was a gift from the Dutch people to the United States in 1954. The history of The Dutch Carillon in Washington is a history full of hope and goodwill, but also a history full of blunders. And this leads to the fact that our national gift – the richly decorated carillon – has literally always sounded out of tune. In 2019 the carillon was brought back to the Netherlands to be restored and also now really well tuned. The American part of the restoration – the bell tower – turns out to be much more expensive and the planned return of the bells by ship to America was cancelled. And while the Americans were raising funds, the bells were idly waiting for the next chapter in the turbulent history of The Dutch Carillon. The day before Mike Rijnierse picked up the bell for Sino at the Royal Eijsbouts, the last bell was hung back in Arlington.

The bell tower by the Rotterdam reconstruction architect Joost Boks is an open steel construction of 40 meters high and stands on a small square of quartzite. The tower is special because it is the first modernist design in the monumental heart of the American capital. Most of the monuments in Washington DC, including the Lincoln Memorial, the Washington Monument and the Capitol, which the Netherlands Carillon overlooks, are neo-classical, or figurative, such as the Marine Corps War Memorial which stands a few hundred meters next to the Netherlands Carillon . With its clean horizontal and vertical lines, Boks’ tower is strongly reminiscent of the principles of De Stijl, although Boks was never a member of that group. Boks was not the first architect to be approached to design the bell tower of the Netherlands Carillon. Gerrit Rietveld was the first to be approached, but was withdrawn by the Minister of Foreign Affairs, Joseph Luns, and the Dutch ambassador to America, Herman van Roijen, because of his communist sympathies. Luns and Van Roijen feared a political riot during the height of McCarthyism in America. After J.J.P Oud canceled, Joost Boks was approached.

Rietveld designed a robust tower that was supposed to be built from concrete blockssurrounded by an iron frame. The half-open walls function as rotating soundboards.

Due to the great demand for engineers after WWII, the Foundation for Technical Higher Education for the Northern and Eastern Netherlands was established in 1948, the predecessor of the current University Fund Twente. Companies and governments involved in the foundation lobbied unitedly to bring a technical college to their region – they were convinced that the arrival of a college would have a positive impact on employment and business in their municipalities. Although the minister chose to establish the new technical college in Eindhoven, it soon became apparent after its opening in 1956 that the second technical college could not meet the high demand for engineers either. In 1964 the T.H.T. (Technical University of Twente) opened. To distinguish itself from the existing technical colleges, the THT chose to organize education according to the Anglo-Saxon campus model. This special educational model also came with a special gift, according to the mayors of the Twente Oost-Gelderland Community of Interest. They commissioned the famous architect and designer Gerrit Rietveld to design a bell tower with a carillon, which would adorn the campus following the American example. After more than half a century, Rietveld’s bell tower still stands exactly as he designed it. In 1979 Wim t. Schippers Het Torentje van Drienerlo, a work of art in a pond on the campus of the University of Twente in Enschede. The work of art, a church steeple that protrudes with its bell-chamber just above the water surface of the pond, gives the impression that a church has sunk into the pond and thus symbolizes the lagging behind of ecclesiastical dogmas with new scientific insights.

For some time now Mike Rijnierse has been working on a plan to bring back the bell in a sculptural work that rhymes with the recent developments of the artist’s work. The anecdotes surrounding the Dutch Carillon have inspired Rijnierse. Following the events of last year, there was no chance to show work and the artist was thrown back on his own. The past year has been a difficult year for everyone and our future looks very uncertain. The world faces great tasks to work towards a better future for all of us. It is time for reflection.

Sino is the Portuguese word for bell, coming from the Latin signum (signal). Sino is the first work Mike Rijnierse displays after the past COVID-19 year, which has been a major one for all of us. The work consists of a bronze bell and a specially designed pentagonal bell tower. Unlike in the regular towers, the bell does not hang, but is placed with its mouth facing the sky, turning the bell into a kind of oriental singing bowl, as are also used in temple rituals. In English, singing bowls are also called standing bells or resting bells. Instead of hanging, the bell has been laid to rest. By reversing the bell, the bell transforms into an instrument for resonance and reflection, making the signal from Sino not a signal of alarm, but a signal for contemplation.