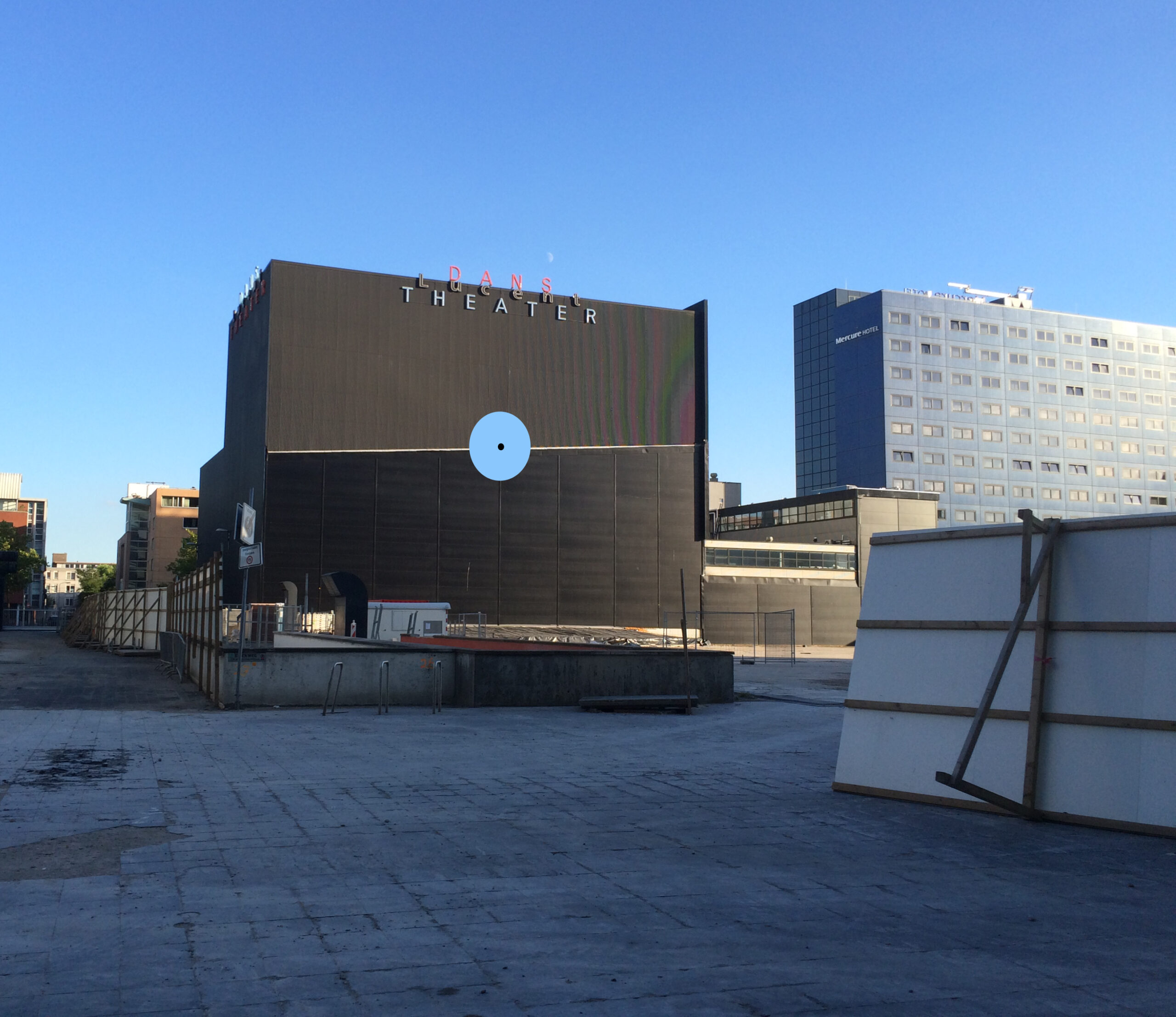 A thorough renovation takes place in the center of The Hague. The urban renewal in the Spuikwartier not only ensures an infrastructural adaptation of the city center of The Hague, but will also announce a new era for the cultural field in The Hague. The Spuiplein is being prepared for the construction of the new Education and Culture Complex (Amare). Meanwhile, the Dr. Anton Philipszaal, the concert room of The Resident Orchestra, is being demolished. Yet, the theater tower of the Lucent Dance Theater still stands there.

The False Mirror aims to document this momentum in an installation based on the principle of the Camera Obscura. The stage tower of the Lucent Dance Theater is currently a black box that has been placed in a new playing-field. There is, as it were, a physical playing-field between the City Hall and the stage tower of the Lucent Dance Theater. This transition creates a situation on which the artist Mike Rijnierse want to respond, by making an adjustment on the stage tower. Through a minimal intervention (a hole in the wall / pinhole) the stage tower will temporarily transform into a camera obscura. The incident light sheds an image of the outside world on the opposite wall on the inside of the stage tower. As is the case with an image through a lens, the outside world is depicted upside down, so that the City Hall of The Hague will be projected upside down in the stage tower.

During the construction trajectory of Amare, the theater tower will operate as a pinhole camera that registrars a documentation of the transition. This documentation yields a time-lapse, which eventually creates a document in which this transition can be read back.

Through this infrastructural and architectural intervention, the Spuiplein is experiencing a metamorphosis and a new view of the City Hall is created. Thanks to the design of Richard Meier, the City Hall contains a powerful graphic quality that rarely comes into its own due to its tight layout in the city center of The Hague. Through the demolition of the Dr. Anton Philipszaal and the public space of the Lucent Danstheater there is temporarily a unique view on the architecture of Richard Meier. At the end of ‘Day One’ of the 1848 Revolution, appropriately, witnesses testified that in different parts of Paris, independently of each other, people shot up public clocks, as though instinctively determined to stop time just as darkness was about to fall naturally. Obeying the law is suspect’, asserts Louis de Saint-Just, one of the leading promulgators of the terror-effect. With the perfectly French invention of revolutionary terror – domestic as well as ideological -the scientific and philosophical genius of the land of the Enlightenment and supreme rationality topples over the edge into a sociological Phenomenon of pure panic. It was at this moment that the revolutionary police chose an eye as its emblem; that the invisible police, the police spy, replaced the evident, dissuasive police force; that Fouche, the orator and former monk, confessor to the sinner, set up a camera obscura of a different knit, the famous cell in which the correspondence of citizens under suspicion was deciphered and exposed. A police investigation that aimed to illuminate the private sphere just as the theaters, streets and avenues of the public sphere had previously been illuminated, and to obtain a total image of society by dispersing its dark secrets. A permanent investigation within the very bosom of the family, such that anything communicated, the tiniest shred of information, might prove dangerous, might become a personal weapon, paralyzing each individual in mortal terror of all the rest, of their spirit of inquiry. Remember that in September 1791, on the eve of the Terror, the Constituent Assembly, which was to disappear the following month, had instituted the Criminal Jury as an agent of justice whereby citizens, as members of the jury, acquired sovereign authority with the power to sentence a person to death without appeal. (In legal par-lance, this is a double-degree move.) The people and their representatives were thus granted the same infallibility as the monarch by divine right they were supposed to replace. It would not be long before common justice showed the flaws Montaigne had described two centuries earlier: ‘A heaving sea of opinions …forever whipped up … and driven on by customs that change with the wind. …’ – Paul Virilio, ‘The Vision Machine’, (1994) –

What is interesting is that the name was penned by the surrealist writer and fellow Belgium, Paul Nougé. The painting was previously owned by Man Ray, a photographer from Belgium, from 1933 through to 1936.
Today this oil on canvas painting is housed in the Museum of Modern Art in New York. The False Mirror is a magical surrealistic painting.
The False Mirror is a painting of a large, unblinking eye, with no eyelashes present. A large black pupil is located in the center. The iris is painted to represent a bright blue sky with floating, white, fluffy clouds. The iris appears to be full of life and almost luminescent, while the pupil is black and dead. The observer can also see the white sclera of the eye. The upper and lower lids of the eye almost appear to be stretched, giving the eye a bulbous like quality. The emotion that instantly springs to mind when observing The False Mirror, is that of wonder and fear, as this is the emotion that has been represented in this surrealist paint form. The False Mirror is widely acknowledged to represent the limitations of human vision. A mirror reflects what is places before it, whereas the eye is subjective, it filters and processes those images that it wishes to see. It does not merely reflect, but thinks and feels about those images that the brain processes. The eye in The False Mirror also serves several purposes. As an observer we can look through the painting, we look through the eye towards the blue sky filled with white floating clouds. It is almost as if we are looking through a window that is in the shape of an eye. What Magritte has managed to achieve with The False Mirror, is the sense that the observer is also being watched by the eye. Does the eye see what we see? The observer and observed become one identity, with the identifiers of each becoming somewhat blurred. The False Mirror is an incredibly haunting picture. This is due to many factors. We have the bold and striking nature of the eye that almost appears to jump out of the painting. It is all seeing, unblinking. The harshness of the lines that surround the eye, the lashless lids and the gaping black hole of the pupil, all help to juxtapose the softness of the bright blue sky and almost dreamlike quality that it represents. The painting though is perfectly balanced, with its use of core colours and the black pupil as its central, focal point.

As we observe the image we question if the blue sky and clouds are part of the eye? Is the eye simply a reflection of the sky? Or are we viewing the image through an eye shaped looking glass? All of these assumptions are possible and all are valid. The painting raises many philosophical questions about human nature and how we perceive the world and those around us. We have both created and experienced the environment around us, and this is represented in the fact that the eye both sees and is a reflection of the world.

The False Mirror was one of several pieces of art that was produced by Magritte between the First and Second World Wars. It is therefore probable that his art, and in particular this painting, were influenced by the stark and haunting conditions of war. Perhaps the eye represents a dreamlike state and an environment that is constructed from peace and tranquility.